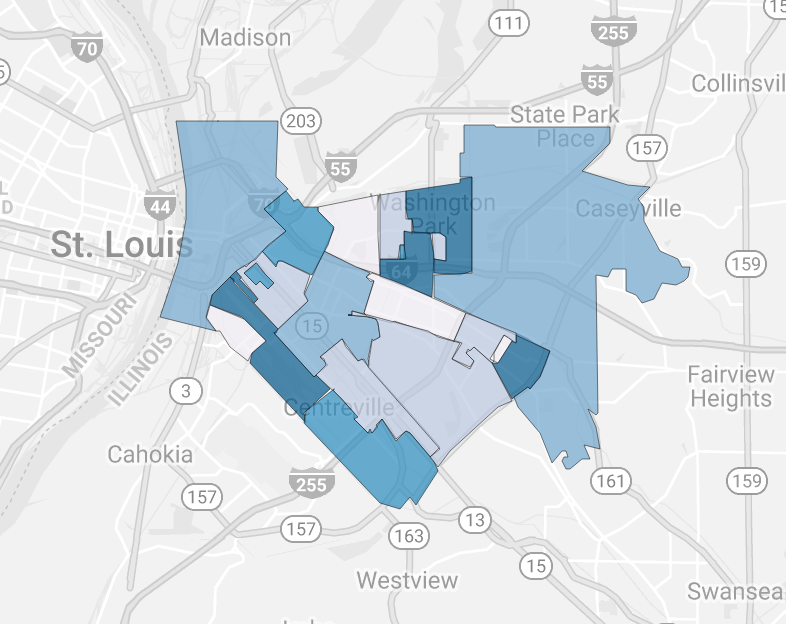 When EDI partners in Greater East St. Louis learned about the EDI Project, they were already underway with various efforts related to increasing program quality, centralizing enrollment intake, workforce development, and partnering with parent leaders in their community. They felt the EDI would provide valuable insight to support these initiatives as well as the community’s complex problems related to access, coordination, quality, responsiveness, and equity.

“We are proud of our progress with current initiatives. The EDI will help us continue to imagine what might be possible. It will help us identify where we need strategy design, how to improve instructional quality in early childhood and kindergarten to accommodate skill gaps for young children across the five key domains, and measure the results of our work at the 3rd grade level to assess fade-out of our efforts. We are hopeful that the EDI instrument will provide key information that our cross-sector partnership can use to improve child outcomes within Greater East St. Louis.”

Written by the EDI Project Team in collaboration with the Community Team of Greater East St. Louis.

The EDI Community Team in Greater East St. Louis met on three separate occasions from September 2017-June 2018 to construct the criteria and build consensus to finalize the names of neighborhoods in the defined community area.

During these meetings, the team used static maps to identify neighborhoods. Through a relationship with Southern Illinois University Edwardsville (SIUE), geospatial mapping technology was utilized to electronically enlarge the maps and identify physical landmarks. The team engaged residents- including school bus drivers, police, peer advocacy agencies, parents and grandparents- who knew the neighborhoods to help determine names and boundaries, along with social service agencies and other stakeholders.

Initially, the team made the choice to use Census block groups, which generally contain between 600 and 3,000 people, with an optimum size of 1,500 people. Each Census tract contains at least one block group, and block groups are uniquely numbered within the Census tract. A block group is the smallest geographical unit for which the Census publishes sample data. Once children were geocoded to the map, the team was then able to determine if preliminary neighborhood boundaries in each area met the minimum threshold of at least 10 kindergarten students.

Through this process, it was determined that some blocks would be combined into Census tracts. Some neighborhoods remained in Census blocks because there had been specific programming and other resources directed to those blocks and the team wanted to have more nuanced data to consider community changes made over time. The discussions led to the following criteria for determining names:

The final Neighborhoods Names were:

Wave 1 sets the baseline and, as communities contextualize the data and gain deeper insight, there may be a need to make modifications. For Wave 2, names may be added to with a slash or hyphen (-, /) in order to most accurately describe how current residents refer to their neighborhood. The original name is only replaced in rare circumstances, such as when the name reflects a landmark that has moved or no longer exists, or the community feels the name was a misnomer in Wave 1.

The EDI Community Team held weekly meetings from November 2019 to January 2020 to discuss data collection, including neighborhood names. There was a shared, ongoing Google document where team members and residents could add questions and comments to build consensus on these names, as well as a survey to ensure that all group members could give feedback. In the end, the following additions and one change were made to the neighborhood names:

The final neighborhood names for Wave 2 are as follows:

Download a PDF of the data sources used for Greater East St. Louis.