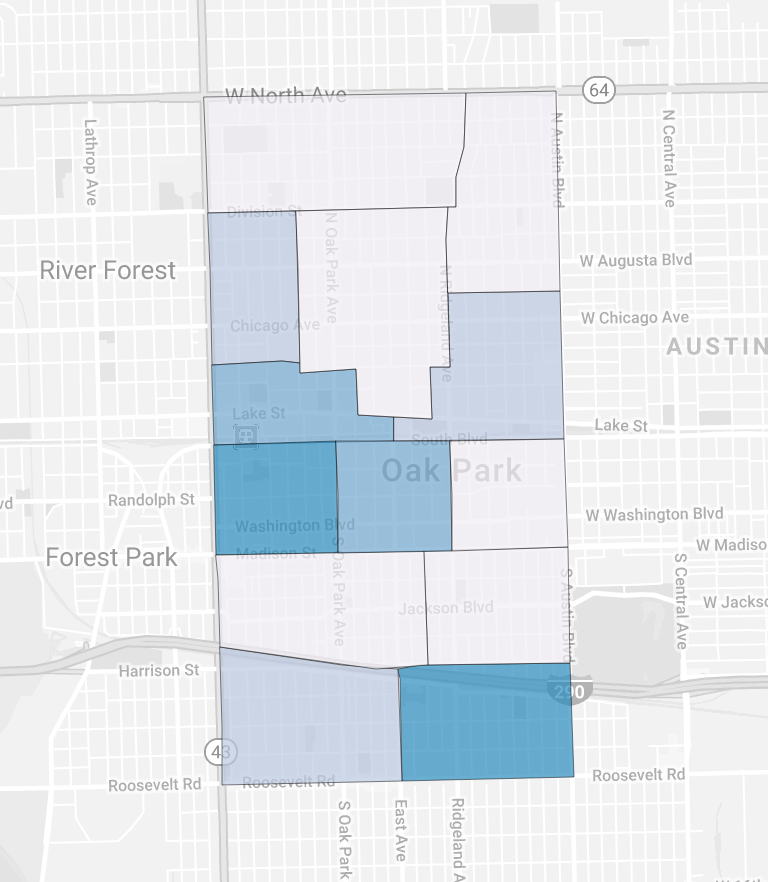 Oak Park’s Collaboration for Early Childhood, a unique public/private partnership designed to improve local early childhood resources. With more than 90 agencies participating, the Collaboration works to overcome the fragmentation and scarcity of services endemic to the early childhood field by integrating all of our community resources to better meet the needs of the youngest children and their families.

The Collaboration for Early Childhood and the Oak Park Elementary School District 97 implemented the EDI to gain new insights about early childhood resources and their accessibility. Mapping children’s development in relation to their proximity to programs and physical amenities provides hyper-local data that can inform the community on how to better align resources. The EDI results can provide a foundation in establishing a regular practice of using an early childhood lens when developing community assets and policies.

The Village of Oak Park EDI Pilot Team (Pilot Team) met three times from October 2017— February 2018 to construct the criteria and build consensus to finalize the names of neighborhoods in the area.

To begin the process, the Collaboration for Early Childhood distributed blank maps of the Village of Oak Park (Village) at various public community events and meetings from August through October 2017, and were provided with Census tract parameters because 1) they set neutral boundaries and 2) their use eases comparisons between the EDI results and U.S. Census data. Community members were asked to outline what they considered to be their "immediate neighborhood." The responses resulted in a set of maps that were quite complex— various colors, shapes, and sizes delineating 123 distinct neighborhoods with most boundaries crossing over Census tracts. It is important to note that some residents expressed that the entire Village represented their neighborhood and many shared how their understanding of neighborhoods changed during different periods of their lives.

To build consensus on consolidating the wide variety of neighborhood boundaries, the Pilot Team began identifying landmarks and key areas that would be meaningful to community members, but that also stayed within Census tract boundaries. For this reason, the group decided not to identify neighborhoods utilizing numbers, letters or geographic directions.

The exploratory discussion led to the following criteria for determining names:

Once children were geocoded to the map, the Pilot Team was then able to determine if preliminary neighborhood boundaries in each area met the minimum threshold of at least 10 students. While each neighborhood met the threshold, two of the smallest Census tracts were eventually combined to acknowledge that two contiguous tracts comprised a single neighborhood.

The following neighborhood names were discussed and considered:

Overall, the Pilot Team decided that the Frank Lloyd Wright Home and Studio and the Cheney Mansion were more geographically recognizable than the directional references to Augusta Ave. Additionally, the team added the word “areas” to all neighborhood names because the reference goes beyond a park or a landmark and is inclusive of the surrounding environment.

The historical perception of vulnerability associated with the areas in the eastern and southern portions of the Village was up for debate throughout the naming process. However, the Pilot Team affirmed its original instinct to avoid using geographical references when naming neighborhoods and, instead, focus on widely known landmarks and historic districts.

A few exceptions diverted from the criteria: three neighborhoods were named after schools that did not have a kindergarten program or were not part of the public school system. The Pilot Team designated the names of Brooks and Julian (names of a middle schools), as well as Fenwick (name of a private high school) to represent the Census tracts in the central area of the Village running between Lake Street and Madison Street. While the Pilot Team initially ruled out school names, members concurred that Brooks and Julian middle schools draw students from across the Village and would not tie the EDI data to these schools because they do not have kindergarten programs. Additionally, since Fenwick is a private high school, using it as a neighborhood would not correspond to the school and it serves as a recognizable landmark.

To download a PDF of the metadata document for Greater East St. Louis' EDI implementation in 2016, click here.